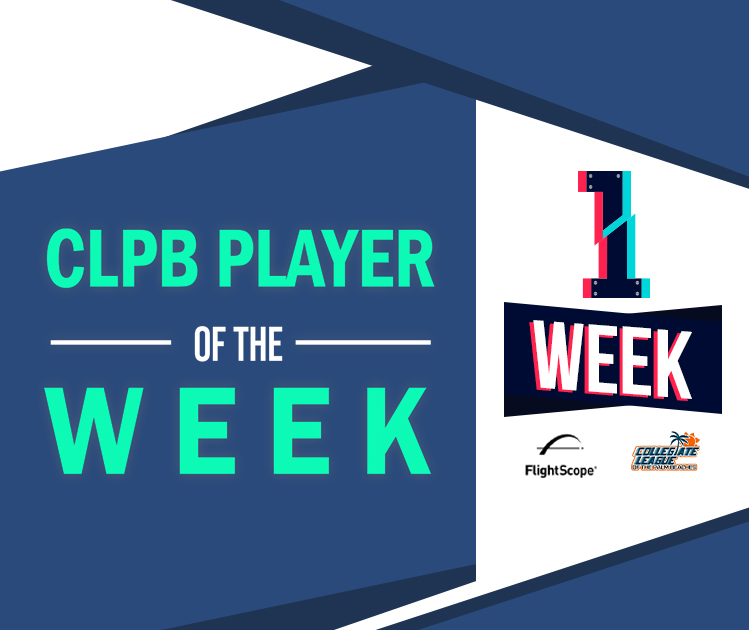 In an abbreviated opening week of the Collegiate League of the Palm Beaches’ 2020 season, it was clear that one player was here to dominate, putting the league on notice with hits, steals, and two wins. Palm Beach Marlins’ OF Enrique Bradfield Jr. made his name heard in both games last week, taking home the first CLPB Player of the Week of the season.

Bradfield leads the Marlins in five categories, including batting average, on-base percentage, runs scored, stolen bases, and was the first of three players to hit a home run on opening weekend, hitting an inside-the-park home run against the Juno Beach Loggerheads. His game against Juno Beach was one of the best stat lines of week one; 3/3 with a HR, triple, two runs, and four RBI’s in his team’s 11-9 win. Bradfield was a double away from hitting the cycle.

“It feels good, I’m seeing the ball well.” Bradfield said post-game against Juno Beach. “I feel real comfortable, I can get up [to the plate], look for a certain pitch to drive, get the job done. It feels good to help the team.”

The speedy Vanderbilt commit started this season fast on Opening Day. Bradfield scored his team’s first run in their win over the Vipers, getting on with a single to center field, stealing second base during shortstop Andrew Estrella’s at-bat, and then getting from second to home on an RBI single by catcher Stephen Perez-Collazo. He finished that game 2/3 with two singles, three runs scored and one strikeout. Bradfield also made a stellar catch in center field later on in the game, diving to his right-hand side to deny a base hit. The Marlins went on to win that game 6-4.

After his first two games of the season, Bradfield is leading the league in average (for players with at least two plate appearances) at .833, is tied for the most home runs (1) and the most RBI’s (4) in the league. He is also in a five-way tie for second in stolen bases with two, both coming on Opening Day.

Most importantly for Bradfield, the Palm Beach Marlins are tied with the Wellington Colts for first place, both with a 2-0 record. Bradfield’s Marlins will face off with the Palm Beach Snowbirds on Tuesday, ending next week with a Friday double-header against Juno Beach and the Vipers.