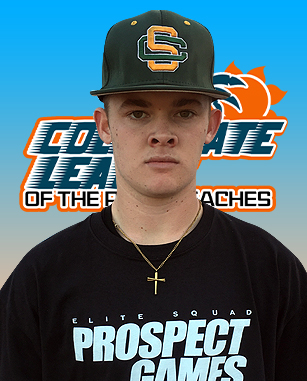 Players will be coming from all over the country in this year’s Collegiate Baseball League of the Palm Beaches, but for two-way player Charlie Nichols, it’ll be right in his backyard.

Nichols hails from Suncoast High School in South Palm Beach County, a half hour away from where the majority of CLPB games will be held this season. Nichols regrettably had his senior season cut short due to the spread of COVID-19 after starting the season with a career-high batting average (.292), slugging percentage (.417), and was just one off his career-high in RBIs with only 24 games played.

“We didn’t get a true judgement, it’s tough having to know that and have nothing we could’ve done about it.” Nichols told me. “Nonetheless, this was our senior year, we had, I think, nine seniors. This felt like the year for us.”

His start at Suncoast didn’t go to plan, hitting .213 with 22 strikeouts in 94 appearances in his Freshman and Sophomore seasons for the Chargers. He also only pitched one inning in his first two seasons, giving up three runs in a loss. Going into his third season, Nichols knew he had to step up if he wanted his team to go anywhere significant, and he made that very clear before the season what kind of attitude the Suncoast dugout needed to have day in, day out.

“I knew the weight I was going to have to carry. I knew I had to play more of a ‘captain’ role.” Nichols told me. “We were losing nine seniors [after 2019]… it was me getting the whole team to buy in.”

Nichols wanted to make sure that Suncoast wouldn’t disappoint with his last year with their veterans. For Charlie, he didn’t just stress that on opening day of the season, but on the opening day of practice.

“Obviously we weren’t expecting things to be the same, and it all started at practice.” Said Nichols. “I had to let them know that the focus had to be there, and once that focus was there, the little things would start to come together. Once we had everyone bought in at practice, it began to show on the field.”

When asked about wanting to be a leader, Nichols confidently proclaimed “I felt like I was born into the role.” As this “leader” in his junior season and abbreviated senior season, Nichols did nothing but deliver. Nichols batted .291 with seven RBIs and four extra base hits at the plate. On the mound, he was even better, throwing a 2.17 ERA in 11 apperances, collecting two wins and one save with 54 strikeouts and just 26 walks, landing him a scholarship at Nova Southeastern University in Davie.

For him, it was important to not only come into this past season as a spark for his teammates, but for this summer as well. The challenge for Nichols this summer is one that he’s not only known about, but is looking forwards to.

“I’ve heard nothing but great things, I’m excited about the talent of the league.” Nichols explained. “I know if I’m going to be put in there playing against good talent, the results are going to be great.”

Nichols will be focusing mostly on pitching this summer to boost him for college, and the league presents competition that he hasn’t seen before. Accepting to joining leagues like the PLCB at such a young age means that he will be playing against not only older, more groomed talent, but talent that he won’t have much preparation or knowledge about when he takes the mound. The task at hand, however, hasn’t phased the future Suncoast graduate.

“My mentality anyways is to go out there and throw the ball.” Nichols said. “I don’t think, I don’t do all those pre-game rituals… not having any background is actually going to make things easier. I’m going to be more relaxed, more focused on playing my best ball.”