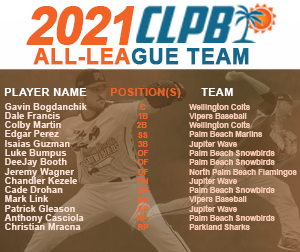 2021 CLPB All-League Roster has been announced by league office

Palm Beach Gardens — As the conclusion to another successful summer baseball season with the Collegiate League of Palm Beaches is upon us, all ten coaches from around the league have selected the 2021 CLPB All-League Team.

The best player for their designated position was selected and every vote was well deserved!

After the incredible season that all of these ballplayers had, there will be an abundance of recognizable names up and down the roster.

The league-leader in batting average, Colby Martin of the Wellington Colts, was selected at the 2nd base position this year. A .469 average, 30 hits, 9 RBI’s, and 6 walks.

Another outstanding offensive talent that joined us this year was 2021 CLPB Champion & series MVP, Chandler Kezele of the Jupiter Wave.

Chandler was selected as the best designated hitter and rightfully so with two 3-run home runs in games 2 & 3 of the championship series. Kezele was consistent in the box all year long notching a .388 average with 26 hits, 3 home runs, and 18 RBI’s.

Although, Kezele did have a few teammates to aid him in the Wave’s route to the championship. Isaias Guzman was selected All-League at the 3rd base position but also was selected the 2021 Player of the Year from the CLPB!

Congrats to Izzy as we wish him the best of luck the rest of his collegiate career and beyond.

On the other side of the diamond, there were several guys on the mound that were lights out!

All-League pitcher and 2021 CLPB Pitcher of the Year award goes to Mark Link of Vipers Baseball. Congratulations to Mark for being the most dominant pitcher seen to date in the league.

The filthy right-hander dealt unruly performances day in, day out. Link shoved 32.1 innings while only giving up four earned runs all year, 36 strikeouts, only six walks, and a disgusting 1.11 ERA.

A huge thank you from every from the CLPB in 2021. The cooperation and effort that was put in from top to bottom really made this year special.

Congratulations to the Jupiter Wave on becoming CLPB Champions in 2021! We hope to see many returning players and interns for another exciting season in 2022.