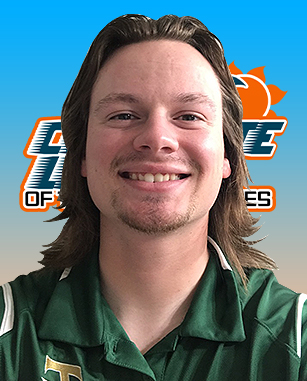 What made you fall in love with baseball?

Ever since I was a kid I enjoyed playing the game with my friends. Then as I grew older, I developed an urge to just get better and better. Once I started getting into junior high, high school, and eventually college I caught myself wanting more with the game. Not just as a player but also wanting to understand all aspects around the game itself.

Who is your favorite athlete and why?

If I had to narrow it down to just one I would probably go with Max Scherzer. The way he prepares for every game whether its mentally or physically is just unmatched, and his focus on the mound during games is unbelievable.

What is your favorite sports city and why?

I would have to go with St. Louis. I am a huge Cardinal fan and been to a lot of games in my life. There is no better energy in a particular stadium or city that compares to St. Louis.

Where are you from?

What is your dream vacation spot?

A house along the ocean in Hawaii

What is your major?

What would you say your hidden talent is?

I am a really good bowler

Do you have a nickname if so, why was it given to you?

Over the years people have just called me random names such as Maxamillion, Maxy, and other things like that but as far as I’m concerned there is no reasoning behind it.