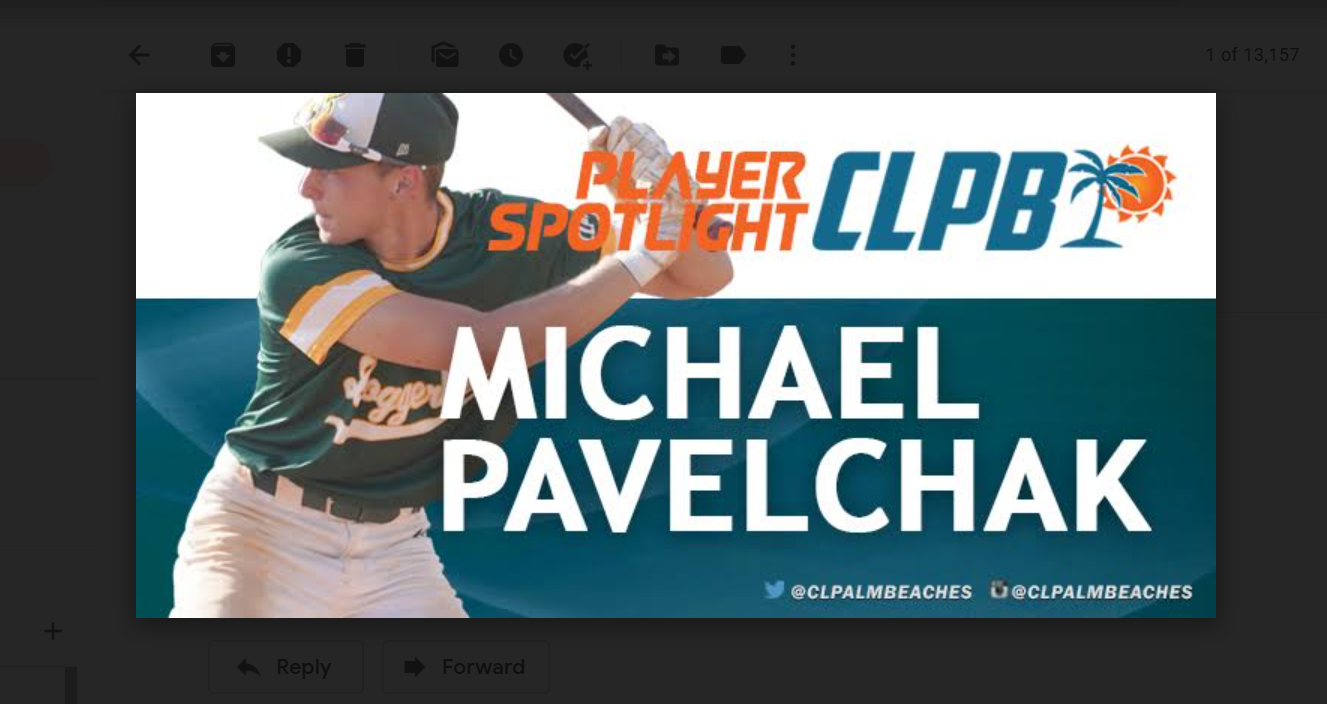 Michael Pavelchak is a starting OF for the Juno Beach Loggerheads in the CLPB 2021 season. Pavelchak has produced at a high level for the Loggerheads with a .328 BA, 14 RBI’s, 16 runs and 11 stolen bases in 25 games. He currently is a junior at Rockland Community College where this past season he put up a .378 BA with 23 RBI’s, 1 HR, 32 Runs and 15 stolen bases in 38 games.

Q: Take me through your experience during the 2021 CLPB All-Star game this past Sunday, July 18th

A: The CLPB ASG was probably one of the coolest baseball game experiences I ever had. First to play in a stadium like that was amazing; it was the nicest field I ever played on. The field also made me star struck just seeing myself possibly being able to play in a stadium like that one day. The ASG also changed my perception on all the players that participated. It was really cool to go from trying to beat these guys on the field to joining up and riding for them as teammates. It was also a great experience to meet new people and play the best of the best in this league to show off my talent. The whole process from BP to IO to the game gave me a great opportunity just to get to know all the guys throughout the league.

Q: Across the CLPB, you’re known as one of the most vocal leaders any team has this season. Where does that personality trait of yours originate from?

A: Being vocal during the game has always been in me from when I first started playing ball. Being vocal just keeps me focused and in the game personally, but I also feel like if your team believes in you it gives you so much confidence at the plate or on the bump which is a huge part of the game. Without confidence it’s hard to succeed in baseball so I try and give as much confidence to my players as possible.

Q: What made you decide to play at Rockland Community College and stay in your hometown state of New York?

A: Honestly the reason why I stayed in Rockland and got to RCC is I wasn’t recruited out of high school at all and my American Legion team, the Rockland Post 130 Pirates, played a big part . My American legion team won the NY state championship 4/5 years, and in 2018 my senior of high school we all decided as a team to go to RCC and put Rockland on the map. The next season at RCC we ended going on a 28 game win streak finishing with a 30-8 record. Besides the fact that we were good, RCC was a great fit for me and I got to play with my brothers I played with from the past 5 years.

A: My success at RCC honestly came from the work I put in. I practice this sport everyday trying to get better every single day. Another major part to my success was always staying hungry and never letting off the gas by knowing my teammate behind me was a dog just like me. So my teammates pushing me to be better along with them lifting me up giving me confidence that I am a beast played a huge part to my success as well.

Q: What would you say is your greatest baseball achievement at any level?

A: My favorite achievement was honestly going on a 28 game win streak at RCC simply because we didn’t lost a game for a little over a month; just peeling off that many wins as a team player was so much fun. Being able to play our hearts out every single game trying to keep the streak alive. That season was by far the most fun I ever had playing the sport of baseball knowing we couldn’t let off the gas and teams genuinely were shook playing us.

Q: When you were growing up, what was your dream job? Why?

A: As a younging my dream job is being a major leaguer. This is forever going to be my dream no matter how many people say it’s impossible. This is my dream and I can’t see myself doing anything else being happy. This is also my dream because I want to prove to everybody who said I can’t do it I can and that truly fuels me to prove people wrong.

Q: You currently have a .328 BA with 14 RBI’s, 16 runs and 11 stolen bases in 25 games. How would you say you’ve been able to help your team (Juno Beach Loggerheads) perform well during the second half of the season?

A: I think the biggest part of my success is my consistency always playing my game hard never trying to do too much letting it come naturally. I also think just being there for my team has helped me a lot not just thinking about myself or what I’m doing in the game.  just always thinking about what can I do to help my team in any situation of the game and being ready for all the pressure no matter what happens.

Q: What is your go-to choice of music to listen to when getting ready for a game? Why?

A: My go to choice of music always changes based on my mood throughout the day, but as of recent I have been bumping a lot of Mobb Deep, NBA YoungBoy, and Envy Cain.e I would say those are my top 3 right now. I mainly picking these 3 right now because Mobb Deep and Envy Caine are both based out of NY and they just put the demon in me when I’m ready to play. And NBA YoungBoy has just been on repeat constantly just getting me ready to be a dog on the field.

Q: When it comes to baseball, who is your role model? Why?

A: My biggest role model when it comes to baseball is my cousin James Loney. I’ve been looking up to him ever since I started playing baseball. He played in the big leagues for 10 plus years doing it the right way. I have learned so much from him as a player on and off the field. He does everything with maximum effort and is one of the most genuine, nicest people you will ever meet. So since the beginning of my baseball career, he has helped me and guided me throughout this whole process of life on and off the field. With him as my role model it really sets a standard and gives me clear vision of what it takes to accomplish all of my goals.