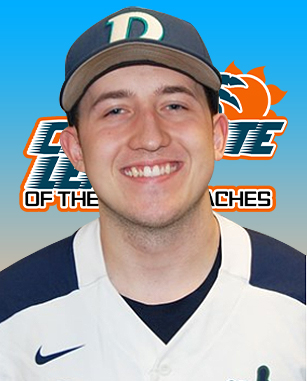 Tim Jinks is from Brick, NJ and is currently a pitcher at Drew University. Tim is in his junior year, majoring in history. Jinks decided to come down to the sunshine state to play in the CLPB for the opportunity to compete against high-level competition, while also training with the experts at Cressey Sports. I asked Tim what his career highlight in baseball was, he said that he considers his next outing as his career highlight. He likes to keep a steady and consistent attitude through the highs and lows with a sport that is defined by failure. Tim’s gone through quite some adversity during his baseball career. He never made his high school team and during his sophomore year of college he tore his posterior and anterior labrum. As a result, Jinks attacks obstacles with a dedicated and consistent work ethic. He brings that mindset to the diamond where he is a huge fungo golf guy and says that his short game is absolutely elite. Tim is also an avid sports fan and his favorite teams are the New York Yankees, New York Knicks, and the Vegas Golden Knights.